Screen Space Reflections are used in every engine these days. Games from The Witcher 3 to Fortnite all employ this effect, so it was natural that I wanted it in Vertices. While I came across a lot of different examples and tutorials online, none seemed to be complete or clear enough to easily show the method, so I’ve decided to share my implementation here in hopes to help others with this technique.

The Initial approach to Reflections in Vertices was to use planar reflections. which essentially was to redraw the entire scene from the reflected position of the camera. 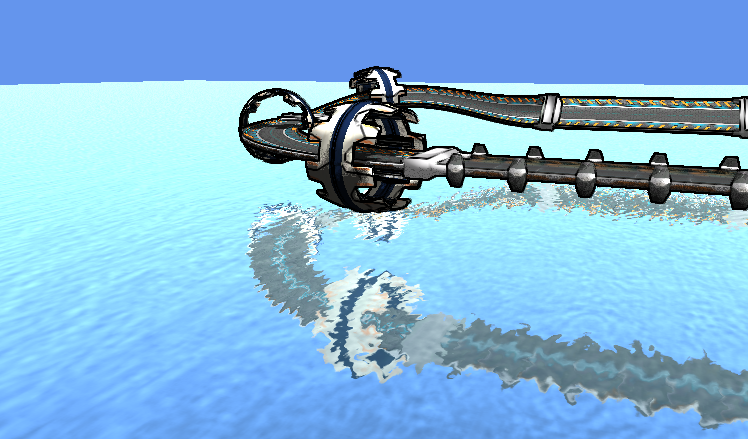 While this provided a great result with very little artifacts, it was expensive as it required re-drawing the scene for each reflected surface. Enter SSR.

A reflection is simply the reflected light bouncing off of a surface into a camera or eye. The amount of reflection and direction is based on the roughness of the surface it’s self. 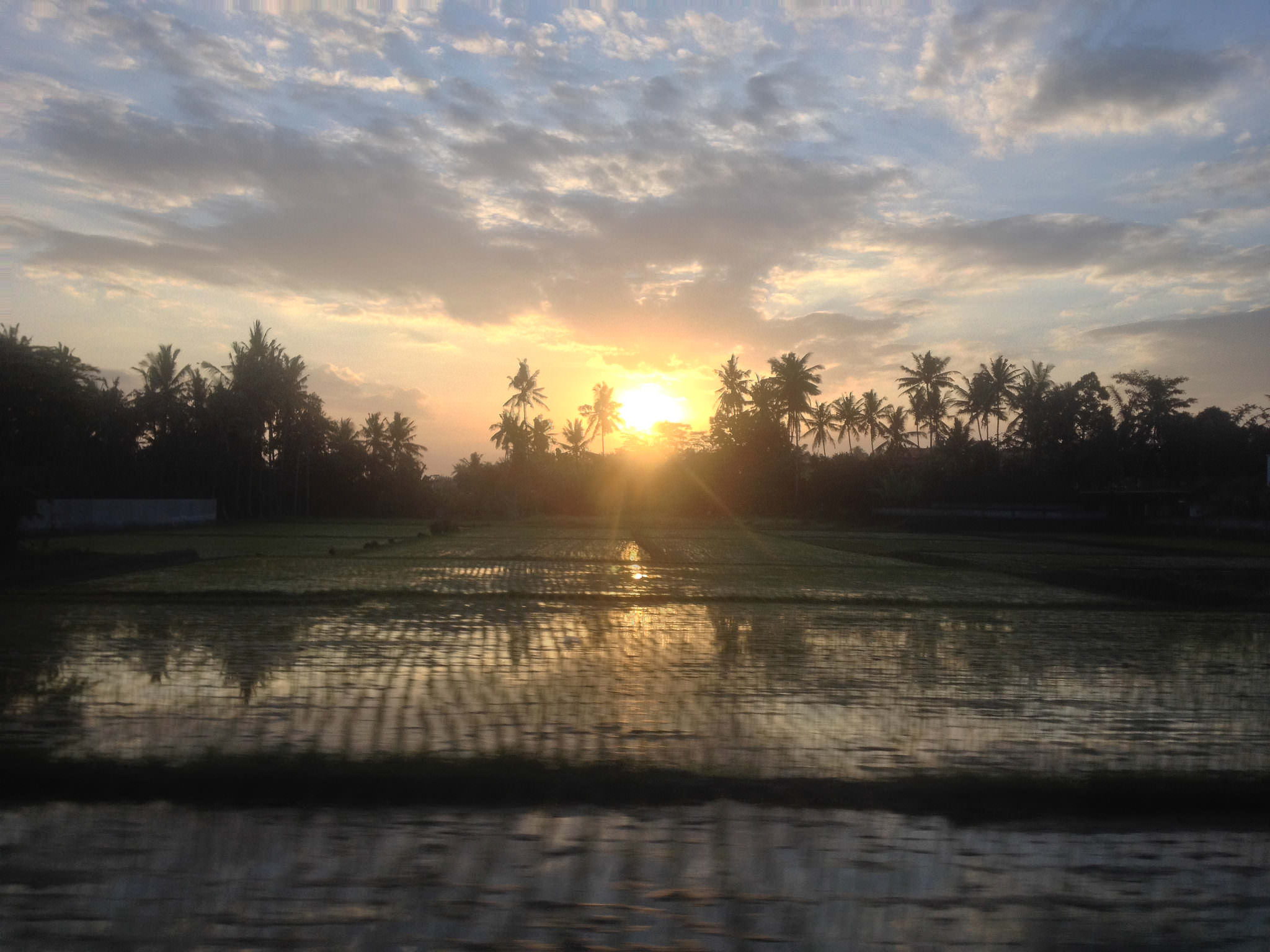 For Screen Space Reflections, we can reverse this process by performing a ray mach for each pixel which we decide is reflectable (using values from the specular map & reflection map along with a calculated fresnel value). From the Camera’s Position and Viewing Direction, we can trace where light would come from off of a reflected surfaces that the Camera sees. We can then do a ray march using the depth buffer until we intersect with a surface. 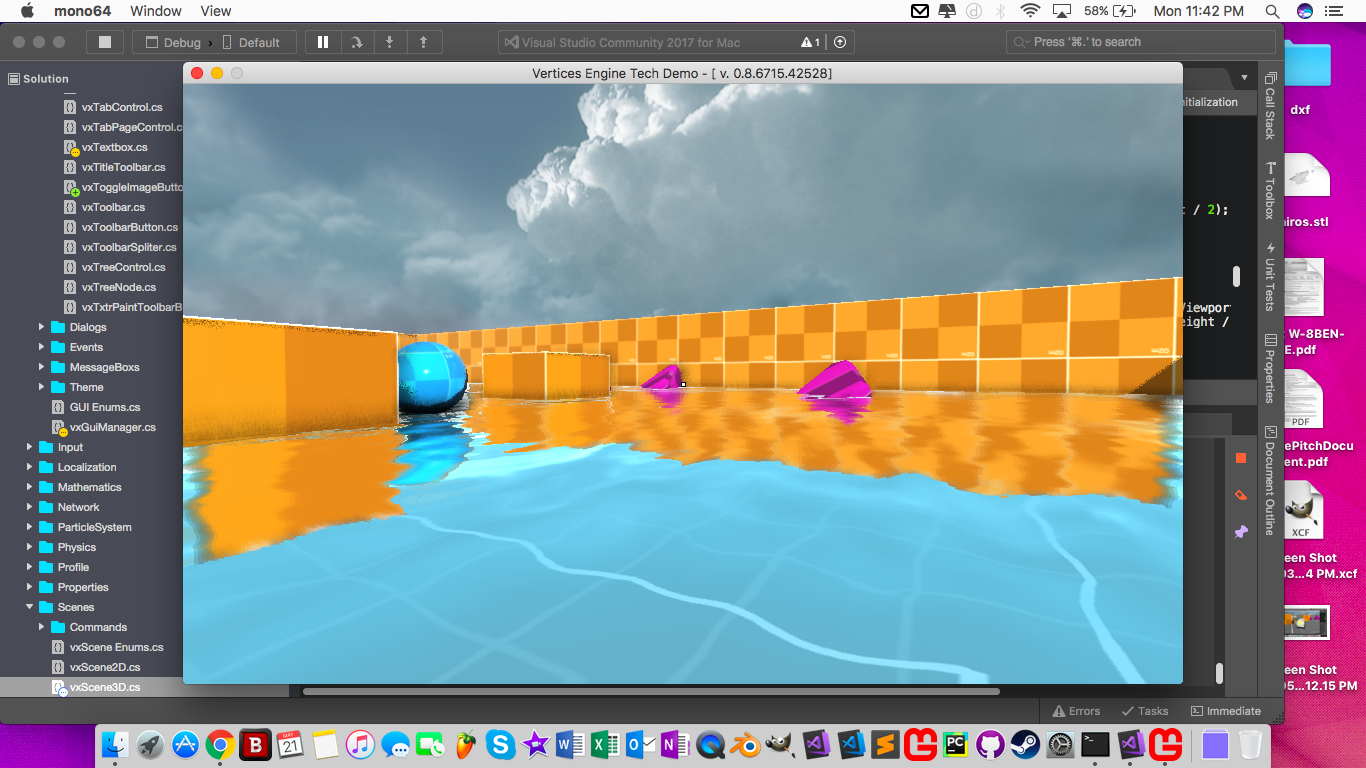 The SSR method breakdown is as follows.

For each UV screen coordinate, we would need to find the 3D World Position (reconstructed from the Depth Map and the Camera’s InverseViewMatrix). We also need to get the Normal of what ever surface is at this position from the Normal Map.

Since we have the Normal and 3D World Position of what ever surface is at this pixel, we need to now find the View Directions and Reflected Vector.

The Reflected Vector can be thought of as the direction the light was moving before it hit the surface and was reflected into the camera. But as we’re reversing the process, this is simply the reflection of the View Direction vector.

The Loop and Trace

Now that we have the physical data such as reflection vectors, world positions and surface normals, we can then do a ray trace.

Our shader uses a TraceRay function which returns a RayMarchResult struct holding whether it hit anything and if so, what are the uv coordinates of that hit.

So let’s break this function down.

The first part we’ll look at is the outer loop. This is what steps along the ray march check if it’s hit anything yet.

It’s this different in depth which is important to us.

Check all the things

The next part then enters a loop checking if the differences between the world position depth and the depth buffer value is below a certain DepthBiasBuffer value. If not then though, it performs a loop checking the surrounding pixels if they are

So if we’ve hit something, then we can return the the output struct, but if not, then we can use a RAND_SAMPLES array we have to check surrounding pixels if there’s any collisions to help cut down on artifacts and missed positive hits.

Once we’ve done the Ray Tracing, we can now output the result as the UV’s and the reflection amount to the SSR UV Map. We use a UV map as it allows us to perform a more precise blurring due to surface roughness later on in a separate pass.

The result here is sent to a UV map which is used by a later Post Processor. Note that we fade at the edges to deal with artifacts at these edges. 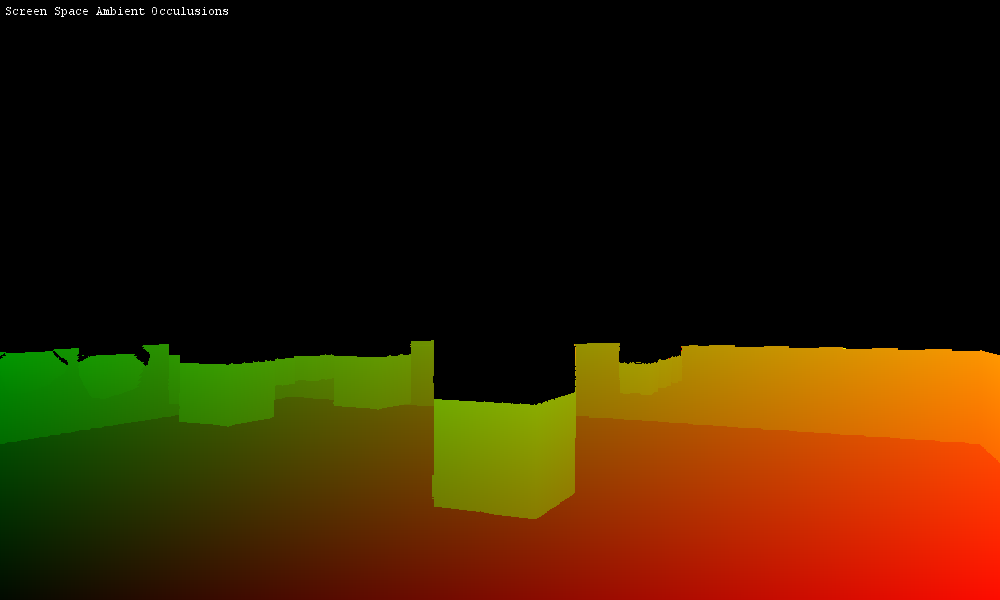 Debug View of the UV Map

Now that we have the UV coordinates of the Reflection positions, we can take those and apply the reflection to the scene. 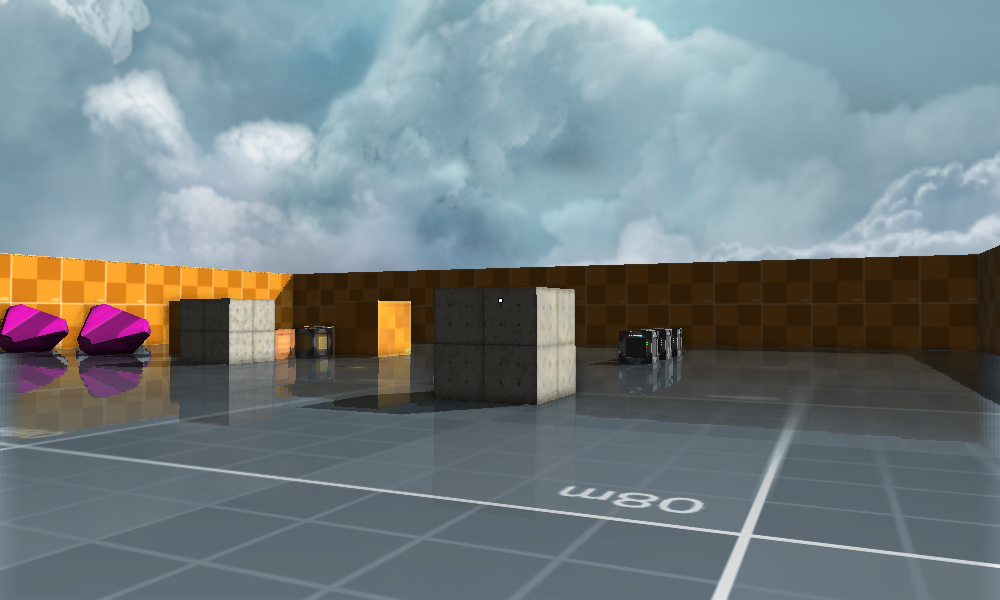 The same scene from the UV map with the Reflections extracted using the UV coordinates and  overlayed on the scene. 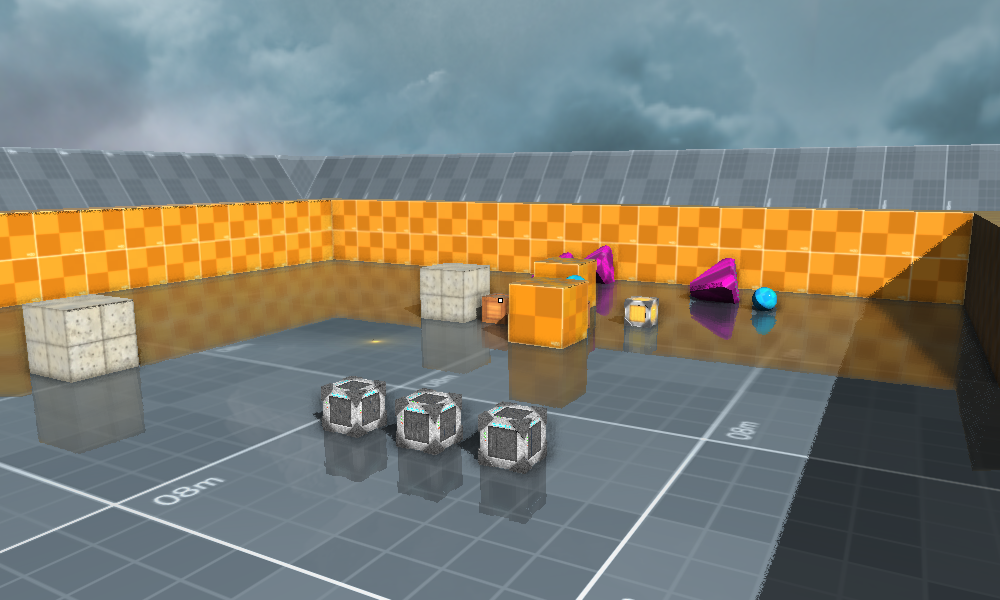 Basic View of the SSR’d scene.

We can use the Specular Power as a reference to the materials ‘roughness’ using that to apply a surface blur. The blur amount would be factored by the distance between the current screen coordinates and the reflected screen coordinates, i.e. how far away is the reflected point on the screen. We can then perform a circular blur with the size of that distance. 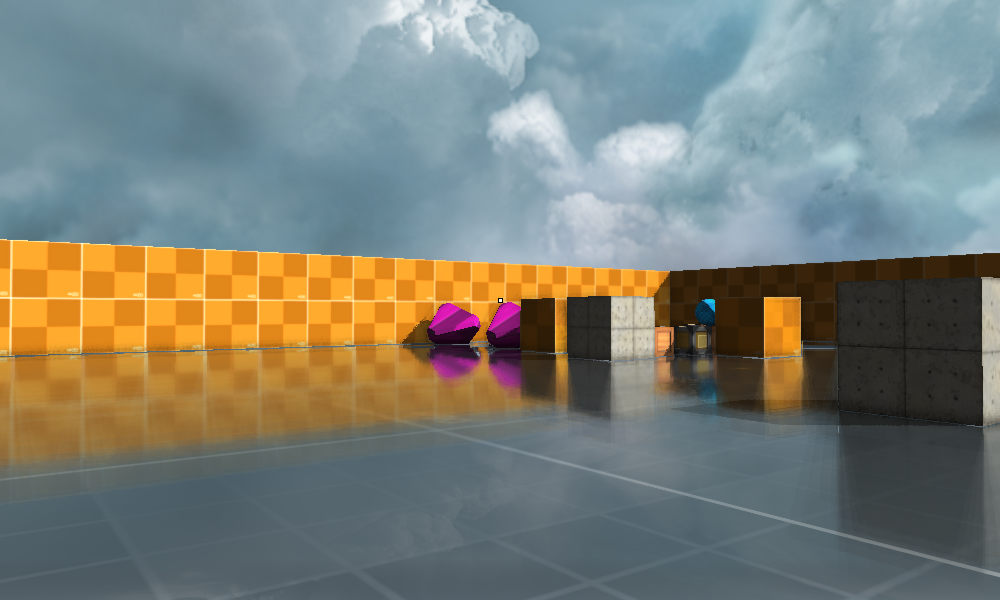 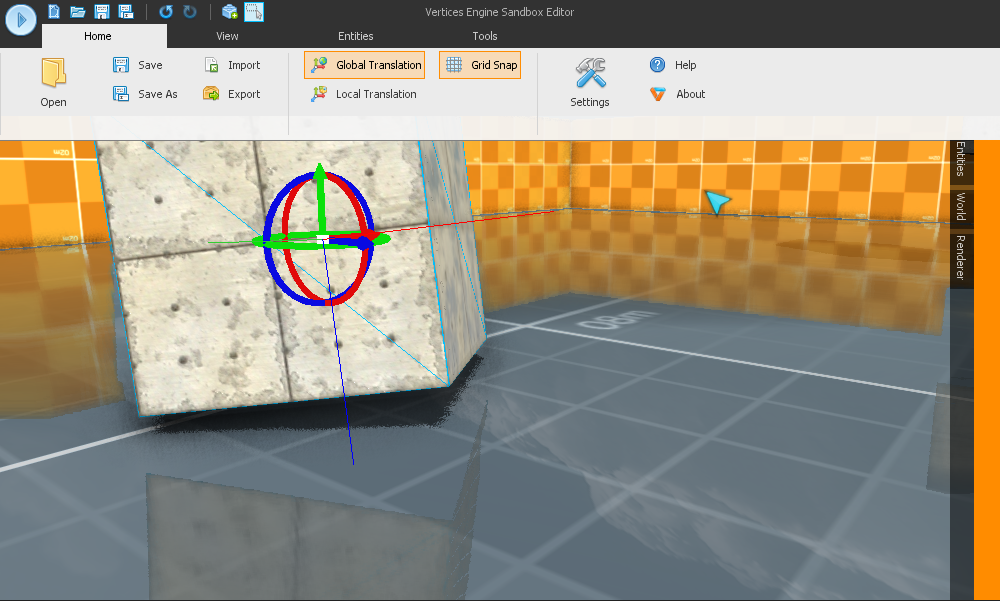 An example of the SSR artifact along with a cube map reflection over top.

The method I’ve shown is a quick and dirty way to get a good reflection in a small area, but this method starts to break down when there are item’s not on the surface. For a more versatile implementation for larger areas, we can add a binary test during the depth test to get a more accurate reflection value. It does add to the expense of this effect though and I’ll be posting an later on covering this. 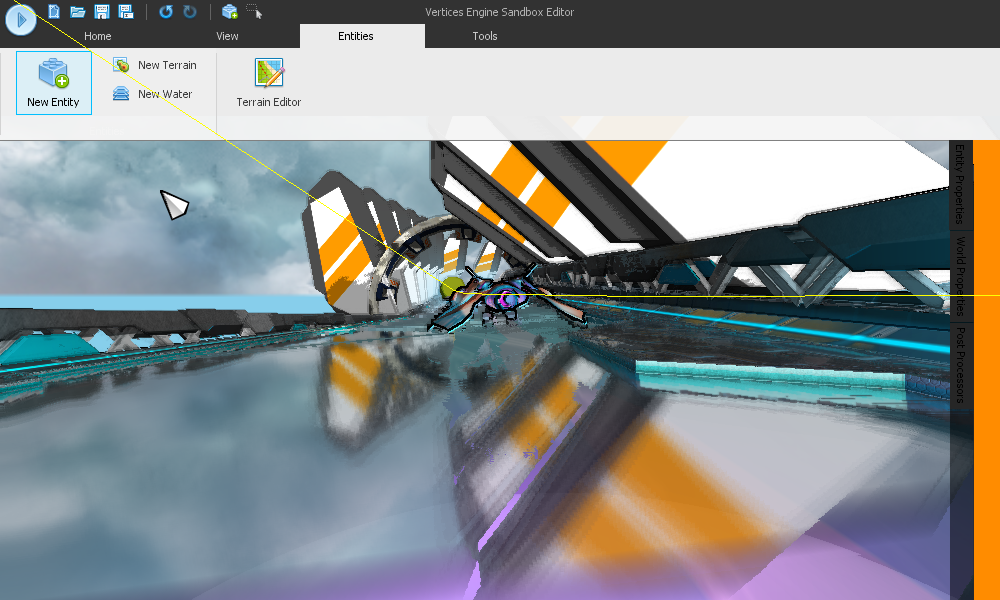 SSR being used in Metric Racer, coming out soon.

SSR is a great effect which adds a lot to a scene, but it can also be temperamental with artifacts and is not a be all and end all solution. That said, when used in the right environment and geometric set up, it can be a versatile addition to your engine.